The crash of a Stirling bomber in "Het Ven" ...

On Friday 21/4/2017, the song "Captain and 366", was officially launched in F/O Meiklejohn's home town in Australia, at the RAAF base Wagga Wagga.
Song writer Scott Cochrane of band Bitter Shoosh was told the incredible story about the last flight of EF366 by the pilot's Nephew - Stuart Meiklejohn.
Scott was so taken by the story that he penned this touching song, honouring the Man who saved so many lives on that night in June 1943. 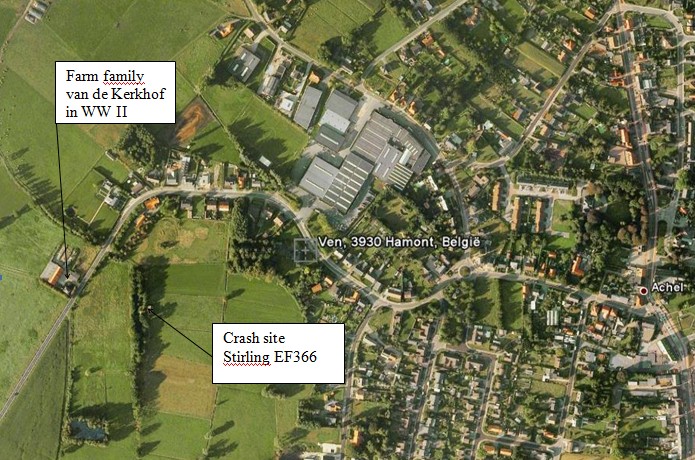 The Stirling EF-366, which belonged to a group that points the bombers to their targets, had to mark a turning point to the south-east of Eindhoven to lead the main body of the bombers to Krefeld.

Soon after having completed this first mission, the crew was engaged in combat with two German night fighters, who had seen the Stirling's shadow above the beacons. At 11,000 feet the aircraft was so badly damaged that the pilot gave the order to bail out. The centrifugal force of the plane was so strong that the crew could hardly move.

The seven crew members of the Stirling EF366 were:

The pilot, Flying Officer Robert Bruce Meiklejohn, stayed at the controls until he knew all had escaped. When the plane came down in a screaming dive and fell towards the centre of the village Achel, he still managed to nose up the plane just before striking the ground, as several eye-witnesses have testified. The sky was clear and there was a full moon that night. Thus not only five crew members, but also an important number of villagers at the centre of Achel, owe their lives to pilot Robert Bruce Meiklejohn. He was to pay the ultimate price, dying on that night, as did one other crew member, navigator Flying Officer C.H.D. Redwood.

The Stirling plane was shot down by Hauptmann Siegfried Wandam, who himself was shot down and died with Bordfunker Fw. Schöpke in his Messerschmitt Bf 110 only a few weeks later, on July 4, 1943. The surviving five crew members of the Stirling EF-366 later wound up in prisoner-of-war camps. Two of them, Mr. Frank Hugo and Mr. Bill Cole, stayed with the Spelters family at Haspershoven Overpelt for 10 days, before the resistance movement tried to help them escape.

(This information is based on the research results procured by Mr. Peter Loncke from Lommel, Belgium)

Saturday 11th September 1999, Mr. W. E. Cole, who was a flight engineer on the Stirling EF-366, honoured Hamont-Achel with a visit and received the freedom of the city. He was guided through the local museum at Het Simonshuis. It was on Mr. Cole's 23rd birthday that war hero Robert Bruce Meiklejohn captained his last plane, giving his own life at the age of 21, to ensure that his crew mates and numerous villagers survived.

On Saturday 17th June 2000 in the afternoon a memorial plaque for the two killed airmen, F/O Robert Bruce Meiklejohn and F/O Charles Redwood, was unveiled and blessed at the chapel of the hamlet De Witteberg at Hamont-Achel.

The ceremony was attended by the families from Australia and New Zealand, by Mr. Bill Cole, by Mr. Brook Barrington from the New Zealand Embassy, by a delegation of the 7th Squadron from Odiham, by a delegation from the Belgian Air Force from Kleine-Brogel, by countless eye-witnesses from during the war and by many patriotic associations and heritage societies. During the ceremony the 7th Squadron made a flypast with a Chinook-helicopter.

In the morning there had been a reception for the families in the town hall, during which the freedom of the town was posthumously awarded to the two killed airmen. 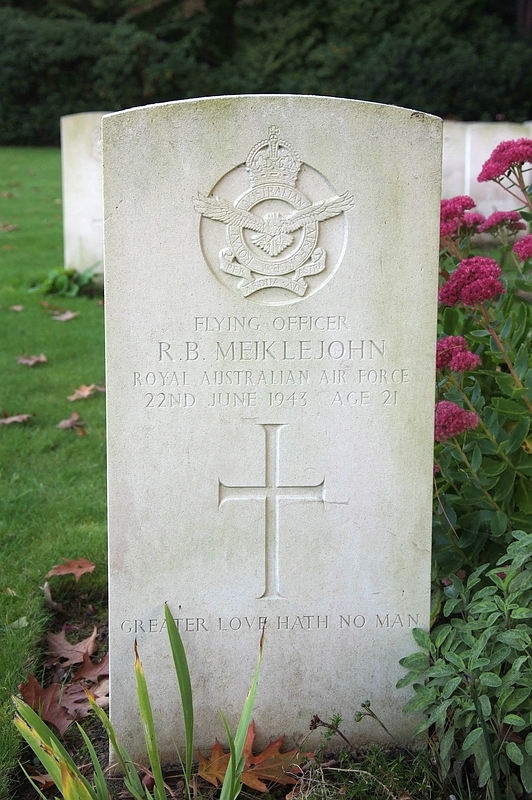 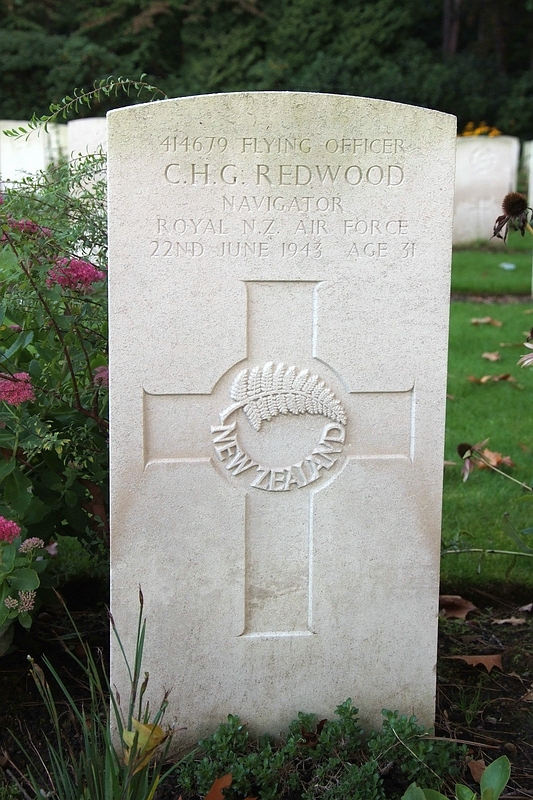 From 22nd to 24th Juni 2001, Mr. Les Ellingham visited Hamont-Achel. He was the radio-operator on the Stirling EF-366.
In the Grevenbroek Museum, he was shown his old radio receiver.
During his visit, he met again several citizens who had helped him on the escape route, like Mrs. Thérésia Verhoeven and Mr. Henri Claessen from Neerpelt and the family of the Justice of the Peace from Neerpelt.
Mr. Les Ellingham was also awarded the Freedom of the town. 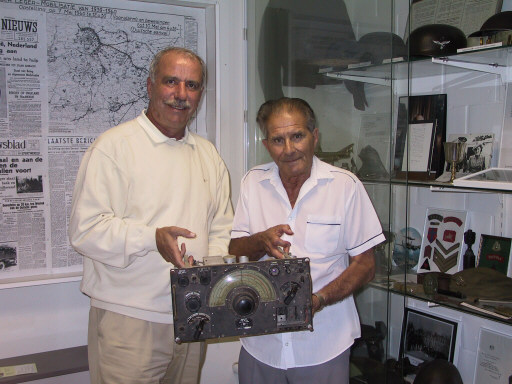